Planning your trip to Pattaya will have more fun! Choose Sunshine Hotels and Resorts and Get 15% Discount on all Top Promotions.Loy Krathong is one of Thailand’s best-loved festivals.

Loy Krathong Festival 2019 will be one of the most celebrated festivals in all of THAILAND. Loy Krathong involves making or buying a decorated basket and floating it down the river for good luck. 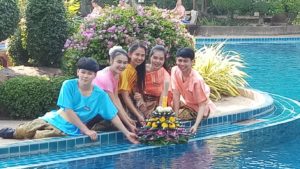 The Festival is usually celebrated on the evening of the full moon on the 12th month in the traditional Thai lunar calendar. In 2019, Loy Krathong falls on Wednesday, November 13 (festival begins on November 11, ends on November 13). It is a light festival (or known as Thailand Lantern Festival) in Thailand on the full moon day in November. The festival is celebrated nationwide by releasing lotus-shaped baskets, decorated with candles and flowers onto the rivers. 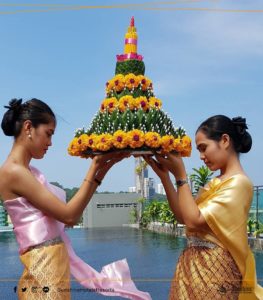 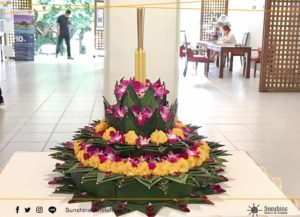 ’Loy’ means to float, while ’Krathong’ is a small Basket, traditionally made from a piece of banana-tree trunk, containing a candle, coins, incense and flowers. The krathong floating on the water symbolizes one’s willingness to let go of hatred and anger. On the night of the festival, Thai people make a wish as they release their krathongs on the rivers. A wish is made by the person carrying the Krathong before its released to float down the river. The Krathong is said to carry away any bad energy and signal a fresh start for the year ahead.

Some people place hair and fingernails inside the Krathong: by doing so, they want to float away from their past mistakes and negative thoughts. It is a purification ceremony to enlighten the mind. Candles and incense are lit inside the Krathong to make wishes or ask for good luck and forgiveness.

Why Loy Krathong is celebrated?

It is believed that the light festival originated with paying homage to the spirits of the rivers and thanking the water god for the rains.

According to King Mongkut (1804-1869), it used to be a Brahmanic festival later adopted by Buddhists to celebrate the Buddha. The candles pay homage to Buddha with the beauty and purity of light.

In the still of the night, there are lights everywhere. Before the celebration, there’s silence: monks are meditating, surrounded by flickering candles.

Plan to stay at Sunshine Hotels and Resorts and celebrate the Thailand Most loved Floating Lantern Festival: Loy Krathong 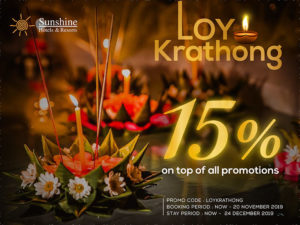 No one knows Pattaya better than us
Why Book Direct?
See Terms & Conditions